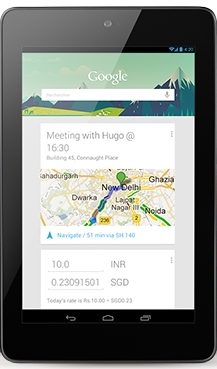 It is a light and slim tablet that made for Google Play Store. More than 7,00000 free and charged supported apps available in Google Play Store for this tablet. It loaded with Android Jelly Bean OS and the device powered by 1.3 GHz Tegra 3 NVIDIA quad-core processor. The tablet has 1GB of RAM for high performance. It's 4325 mAh powerful battery features up to 8-hrs active use time.